Soft drinks can deteriorate your bones and worsen your osteoarthritis.
By Melissa Feldman
Joint Health Magazine is supported by our readers. When you buy something through a link on this page, we may earn an affiliate commission. See our Advertiser Disclosure.

Soft drinks or soda, are non-alcoholic and carbonated drinks that contain flavorings, artificial sweeteners, high fructose corn syrup and other ingredients such as carbon dioxide, sodium, and calories.

Soft drinks may also contain phosphorus and small amounts of potassium. There are several types of soft drinks: regular, caffeinated and caffeine-free just to name a few. Whatever variation of soft drink, the average American consumes 57 gallons annually, making soft drinks the primary cause of obesity in the US.

Soft Drinks Can Be Addicting!

One of the leading soft drinks company is Coca-Cola Company, its cola product (Coke) among one of the highest-selling carbonated beverage in the market.

Like other colas, Coke has a unique “biting” taste which is a result of the carbonation process. A single can of Coke contains 10 teaspoons of sugar, so much more than the recommended daily intake!

An infographic by the British pharmacist Niraj Naik shows that after an hour of consumption of Coke, individuals will experience sugar crash – where your insulin levels are at peak and harmful levels of sugar are disposed of in your bloodstream which leads to a cycle of wanting to consume more sugar throughout the day.

Osteoarthritis occurs when the cartilage in the joint is damaged. The cartilage acts as a cushion to reduce the rubbing of the joints. There are several causes for joint pain, and osteoarthritis, also called degenerative arthritis, is one of the most common.

Recent studies have asserted that soft drinks have negative impacts on bone health. Aspartame, commonly found in diet cola, is an artificial sweetener that substitutes sugar. It increases the levels of acidic pH in the body which results in joint pain. Other ingredients found in soft drinks may also worsen osteoarthritis by deteriorating bone health.

Multiple studies have claimed that cola drinks, and not other types of soft drinks, are the main culprit for bone loss.

One of the studies aiming to determine the effects of soft drinks in the body is the Framingham Osteoporosis Study. The study showed that women are at more risk of lower bone mineral density compared to men, even if the latter consumes more cola drinks.

The Framingham study has helped researchers and experts to form three famous theories on the effects of soft drinks to bone health:

1. Some researchers claim that the loss of bone mineral density is not directly caused by cola consumption; however, people who consume more cola have the tendency to decrease their consumption of other beverages, including milk which is a primary source of calcium.

2. Phosphorus can also be found in cola drinks and is considered responsible for a human’s bone mass. However, some experts theorize that phosphoric acid can cause low bone mineral density. Phosphorus acts in the digestive tract, binding calcium, and magnesium.

Additionally, increased consumption of phosphoric acid from cola drinks may also lower the body’s calcium-phosphate ratio. This imbalance in calcium and phosphate does not improve bone formation as one is needed for the other to function fully.

Despite this theory providing sound analysis, there is one major flaw: chicken and cheese also contain phosphoric acid in levels which are much higher than those found in cola drinks, yet chicken and cheese have no known effect on bone mineral density.

The Framingham cola study has also shown that cola and non-cola drinks have no differences in phosphorus content.

3. The third theory is probably the most accepted and recognized by experts. Numerous studies have directly linked caffeine to lower bone mineral density. Caffeine produces acidic metabolites which can transport calcium from the bones and move them to the bloodstream. Since calcium can only affect bone health if the calcium salts are formed in the bone, this process greatly decreases calcium production and absorption, slowing down the bone formation process.


People also search for >>
According to the research done by the Department of Medicine University of British Columbia, Caffeine has also been found to increase urinary excretion of calcium. Published by the American Journal of Clinical Nutrition in 2001, a study has proven that intake of carbonated beverages has been associated with increased fracture risk in observational studies. 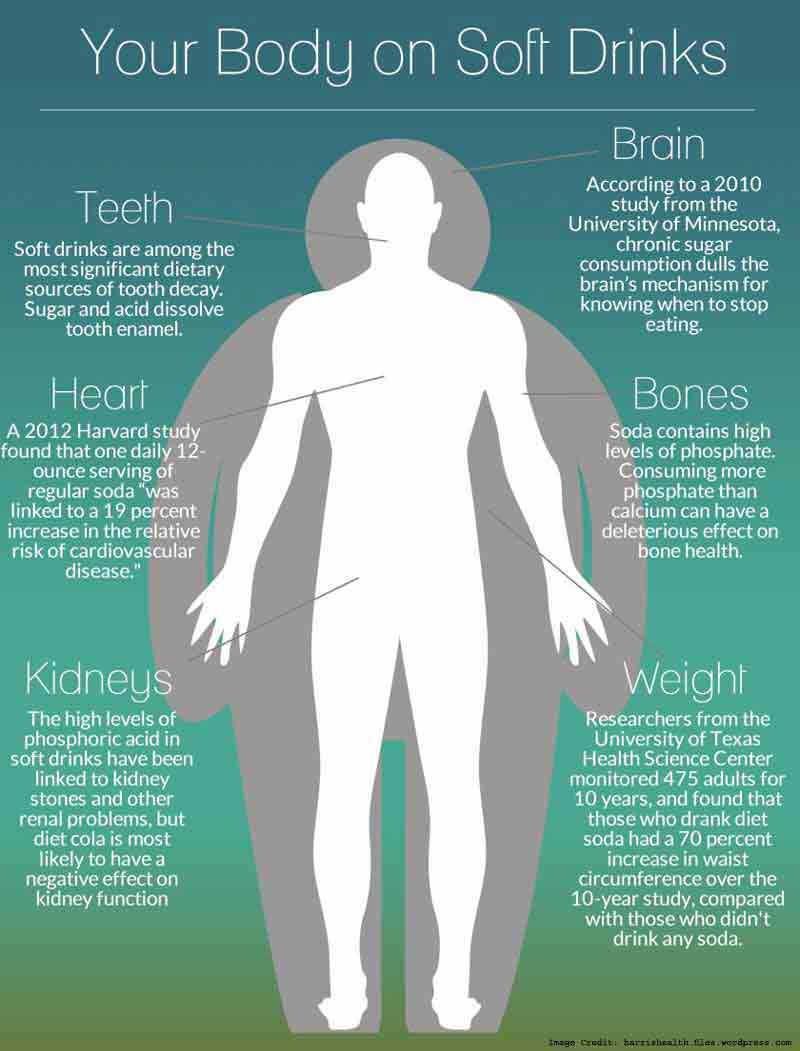 How Much is Too Much?

According to the Comprehensive Reviews in Food Science and Food Safety study, another harmful preservative found in soft drinks is sodium benzoate, which causes DNA damage and potentially leads to cirrhosis of the liver. Soft drinks have also been proven to lead to diabetes, high cholesterol, high blood pressure, premature aging, and heart diseases.

Possible Ways To Avoid the Progression of Osteoarthritis and Joint Pain

There are several ways to prevent osteoarthritis and joint pain, or the progress of this disease on people who are already diagnosed with it.

1. Reduce the consumption of soft drinks. Since most studies have not succeeded in clearly establishing a direct link between soft drinks and their effect on bone health, it would be a good measure to reduce your consumption of soft drinks or avoid it altogether. Studies that provided participants with separate soft drink ingredients have not found any strong evidence that these ingredients can separately produce effects which are dangerous to bone health.

2. Increase your consumption of milk and orange juice, and other foods which are good sources of calcium to increase bone health.

These studies give us all one clear conclusion: soft drinks can deteriorate your bones and worsen your osteoarthritis. From bone loss to cancer, soft drinks in general lead to various dangers that affect not only our bone health but the body’s overall well-being.

There have been no proven health benefits one can get from consuming soft drinks and despite the invigorating taste and biting refreshment soft drinks has to offer, the responsibility in moderating and avoiding overconsumption of these beverages still falls in your hands. When it comes to our health, it is always better to be safe than sorry.