×
Do not sell my personal information
Skip to content
Learn how to deal with patellofemoral pain syndrome, otherwise known as "runner's knee."
By Melissa Feldman Updated: 2022, Dec 15

Runner’s knee is a common issue faced by runners, soccer players and cyclists in particular, but it can affect anybody while playing any sport, or performing any activity that requires constant bending and straightening of the knee.

To prevent further degradation and treat the condition, go through the following as we discuss everything that a patient should need to know about the painful injury.

What Exactly is Runner’s Knee?

Runner’s knee is a common name for what is medically known as Iliotibial Band Syndrome. It’s a painful injury of the IT band (tendon) which connects the knee to the upper thigh. Over time, it can essentially prevent you from running permanently, unless proper and timely measures are taken.

How Does an IT Band Injury Occur?

Primarily an overuse injury, runner’s knee can happen to anybody involved in any physical activity which exerts pressure on the knee and the muscles around it repeatedly.

The injury ensues when the iliotibial band begins to brush against the bones of the knee joint strongly enough to cause pain and inflammation in the area.

What Could be Responsible for an IT Band Injury?

There are plenty of reasons that can give way to runner’s knee, and sometimes, more than one reason is to blame. Go through the following to get an idea of the kind of problems that can cause the IT band to suffer.

What are the Symptoms of Runner’s Knee? 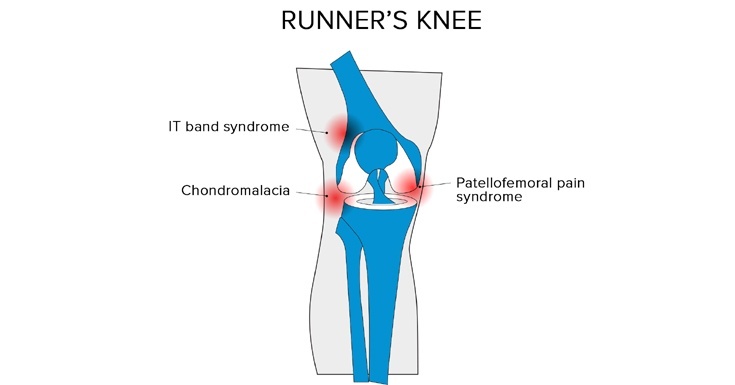 Although the symptoms are fairly common in most people who experience IT band injuries, the intensity and some of the more advanced symptoms may not be there, depending on the severity of the bruising or tearing. The following symptoms are common in runner’s knee though.

Read Next: Types of Knee Pain – Know Why It Happens & Its Solution

What Can You Do if You Develop an IT Band Injury?

After the initial icing of the area, your next step should be to contact an orthopedic doctor, who will likely put you on the RICE program, alongside prescribing painkillers and anti-inflammatory meds.

However, for day-to-day management, someone suffering from runner’s knee can benefit a lot from an insole, provided that it’s a result of misalignment near the ankle joint. Check out the best insoles for runner’s knee[3] on Insoles.com and you may very well be able to get out of bed and start walking much faster than your doctor estimated.

Aside from having the best insoles for runner’s knee, the page linked above also has a very detailed guide on the RICE (Rest, Ice, Compress and Elevate) program which should prove to be quite helpful for IT band injuries in particular and all types of knee injuries in general.