Palindromic rheumatism affects both males and females equally and the incidence is higher among the people in the ages between 20 and 40 years.

Continue to read this article to learn about this rare disease and if you have any of the symptoms similar as this, make sure to visit a doctor and do a check-up. 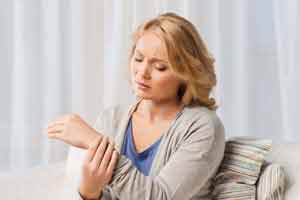 It is also found that more than 50% of the patients with PR go onto develop rheumatoid arthritis several months or years later.

Are you at Risk of Developing Palindromic rheumatism?

You have a higher chance of developing palindromic rheumatism if you have the following risk factors:

PR is an acute mono or oligo arthritis meaning it usually affects one or more joints especially the joints of the hand or feet. However, other joints also may get affected.
The signs and symptoms in an episode of PR include the following:

The above symptoms are often short lived lasting only for about 24 to 72 hours. However these episodes tend to recur again on the same or other joints. After an episode, the joint usually comes back to normal leaving no permanent damage.

The frequency of these symptoms varies from person to person. It can be one episode a day for some and several episode a year for the rest.

How is Palindromic Rheumatism Diagnosed?

During your first clinical appointment, your health care provider will first take a careful detailed history from you and do a complete physical examination. Later they will order some x-rays to be taken.

There is not specific test available to diagnose palindromic Rheumatism. In addition, the lack of damage of the joints after an acute episode makes the diagnosis of PR further difficult.

For this reason, a diagnosis of palindromic rheumatism is only made after eliminating all the possible causes that may give rise to a similar set of symptoms.

Pharmacological Management
1. Non-Steroidal Anti-inflammatory Drugs (NSAIDS)
For the acute attacks of PR, NSAIDS are usually prescribed to reduce the pain and inflammation going on in the joints. The effects of NSAIDS usually lasts only for a short duration therefore you will have to take them regularly. It is best that you start these drugs as soon as the symptoms begin and until they go away.

However with time, the NSAIDS may work less on you as it used to. If this happens, speak with your doctor and change to a different NSAID.

2. Disease Modifying anti-rheumatic drugs (DMARDs)
In addition to NSAIDS, your doctor might prescribe you hydroxyxhloroquine, an anti-malarial drug. It is a commonly used DMARD. This drug helps to reduce the frequency and duration of the episodes. It also reduces the chance of you developing rheumatoid arthritis in the future.

Other DMARDS include Sulfasalazine and methotrexate. Hydroxyquinine and Sulfasalazine are the commonly prescribed DMARDs owing to the fact that they have fewer side effects compared to the other drugs. However, Methotrexate is often prescribed for severe cases of PR.

Palindromic rheumatism, a rare form of mono or oligo arthritis consists of short lived episodes of acute joint pain, swelling and redness. Between these episodes, the patients are completely normal. Some patients with palindromic rheumatism tend to develop rheumatoid arthritis several years later, however with lifestyle modification and treatment with NSAIDs and DMARDs can help to reduce this chance of development of rheumatoid arthritis. This management also helps to reduce the duration and frequency of the attacks.