The producers go-ahead to claim that this product is 250 times more power than fish oil. The company doesn’t give scientific evidence to prove these claims.

It is sold mainly as a joint support ingredient with the producers relying on its anti-inflammation capabilities. In this light, the joint pain product promises to;

What is the Company Behind Frezzor Omega-3?

Frezzor Omega-3 Gold is marketed as a dietary supplement that packs the powerful Omega 3 fatty acids. This product is meant to be used for supplemental purposes only.

As much as it can be used to make life bearable for people with arthritis, it doesn’t cure arthritis or any disease for that matter. This product is manufactured by FREZZOR Inc.

According to the official website, this company is based in California. There has been confusion as to who is the manufacturer with another company by the name Youth Advantage featuring prominently. We wrote an email to both companies and by the time of writing this review, there was no reply. The phone numbers provided were redirected to a voicemail.

FREZZOR Inc. is known with three other Omega 3 related products including Frezzor Omega-3 Gold for pets.

What are the Ingredients Used in Frezzor Omega-3?

The active ingredient in Frezzor Omega-3 are;

Frezzor Omega-3 Gold claims that it is designed as a proprietary blend of Anti-oxidants that will give you a holistic approach against inflammation. Inflammation is regarded among the leading cause of joint pain. By reducing and eradicating joint inflammation, it is in a position to offer pain relief. Given the fact that it is rich in fatty acids, then it has the extra benefit of keeping the skin young.

What are the Pros of Frezzor Omega-3?

What are the Cons of Frezzor Omega-3?

The recommended dosage is two pills per serving. This can be distributed in two separate servings or in one single serving. One bottle will last you an approximate one month. It is highly recommended that you take the supplement with lots of water.

Is Frezzor Omega-3 A Scam?

No. It is not a scam. The product is a legitimate supplement that with a growing loyal following. All the same, this product might not work as advertised. It might work on you and fail to work on another and this doesn’t mean it is bad.

It packs the powerful benefits of Omega 3 fatty acids. On paper, this product is brilliant with the potential to offer real benefits. Nevertheless, this product is highly-priced. We have reviewed best supplements for joints such as Omega XL and Relief Factor with the same benefits but way cheaper than Frezzor Omega-3 Gold. 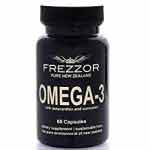 3.8 / 5.0
4
Frezzor Omega-3 Reviewer Rating
Have a Question?
Be specific and include what you've already tried.
Ask a Question