What is New Chapter Turmeric Force?

New Chapter Turmeric Force is a dietary supplement that is touted to contain all the phytonutrients that are found in Turmeric.

The producers claim that they use the extraction method that uses supercritical carbon dioxide in order to obtain the nutrients available in turmeric. New Chapter Turmeric Force is sold to be used in;

The product can be readily purchased online without a prescription. The official website doesn’t sell the product directly but instead, they use third-party resellers such as Amazon, Swanson, and Vitacost. The price varies from store to store and varies further depending on the shipping method used.

What is the Company Behind New Chapter Turmeric Force?

New Chapter Turmeric Force is a dietary supplement that taunts itself to use non-GMO ingredients to provide joint care. The company claims that the herbs used in this product are grown under their careful watch and under strict quality control measures. This product is 100% made of plant extract and thus it will be a darling to vegans and animal lovers.

The bulk of the ingredients used in this product are harvested from the same herb; turmeric. New Chapter Turmeric Force is packed in a sixty soft gel container that can last you up to one month. The company behind this product is known as New Chapter. It is located on 90 Technology Drive Brattleboro, VT 05301 800-543-7279. They produce other dietary supplements which are also 100% plant produce.

What are the Ingredients Used in New Chapter Turmeric Force?

This product is based on only one ingredient;

New Chapter Turmeric Force is made with turmeric as the main ingredient. Turmeric has been used in Asia for decades. It is both used as a food additive and also as a dietary supplement for calming down inflammation and inflammation-related conditions. Turmeric inhibits the production of enzymes that are notorious for causing inflammation.

Inflammation is the second most common cause of joint pain and joint degradation. By curbing inflammation, New Chapter Turmeric Force gives the joints the opportunity to rebuild and repair. The producers of this joint pain relief medicine claim that this product has the following benefits;

Evidently, you will need to be patient with this product since it is designed to work overtime to bring the healing benefits. Some people don’t get positive results even after weeks of using this product and thus users should be patient.

What are the Pros of New Chapter Turmeric Force?

What are the Cons of New Chapter Turmeric Force?

The recommended dosage is one tablet daily with meals and water.in case you experience gastric upset, take this product with juice or add it to meals.

No. New Chapter Turmeric Force is not a scam. It has been subjected to strict quality assurance tests to determine its safety and effectiveness.

New Chapter Turmeric Force is a dietary supplement that is made using some of the most sort after ingredients in the market today. It looks promising on paper but practically is rather slow and not to mention the side effects no matter how mild. 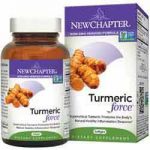