What is Veda Soothe?

Veda Soothe is a turmeric supplement that states that it may support overall wellness. The effects of this product are stated by the official manufacturer to be far-reaching.

As you may know, the main component of turmeric is Curcumin and curcumin is known to harbor many benefits for the body including anti-inflammatory properties and anti-oxidative ones as well.

Moreover, this is advertised as a natural supplement with no synthetic chemical compounds or artificial ingredients.

The product relies very much on the health benefits of turmeric curcumin instead, which is a natural spice that has been used in certain cuisines for a very long time.

We are now seeing it crop up more and more as a superfood that boasts a wealth of health benefits.

What is the Company Behind Veda Soothe?

The manufacturer that produces Veda Soothe is one called Clarity Nutrition[1].

Clarity Nutrition is a company that makes a number of natural supplements that are focused on various functions of the body.

What’s more, is that Clarity Nutrition emphasizes to the customer that all of their products are quality tested in the United States.

They are a purveyor of high-quality natural supplements.

How Does Veda Soothe Work?

Veda Soothe works mainly due to the functionality of curcuminoids, the main component of curcumin. It is believed that curcuminoids can help manage knee pain caused by osteoarthritis[2] as well as some other joint pains. It is the anti-inflammatory properties of turmeric that give Veda Soothe any of its claimed benefits.

What are the Ingredients Used in Veda Soothe?

After reviewing the ingredient list of Veda Soothe, we are able to say with certainty that the product is indeed all-natural. The main ingredient is turmeric which is helped along by the bioavailability agent known as Bioperine. Here are the ingredients.

What are the Pros of Veda Soothe?

What are the Cons of Veda Soothe?

How Should You Use Veda Soothe?

Veda Soothe is to be taken as a dietary supplement. The instructions state that you should take one capsule, two times a day and preferably with your meals.

How Much Does Veda Soothe Cost?

The official Clarity Nutrition website has Veda Soothe for sale at $149.00. This buys one container and a single container of the product comes with 60 capsules, about a one month supply.

Any of the products that are purchased directly from the official Clarity Nutrition website come backed up with a 60-day money back guarantee.

There is currently no free trial being offered for Veda Soothe. This could change in the future, however, if the product begins to become more popular.

The long and short of Veda Soothe is that it definitely has its perks, but there are also some areas in which it could use some improvement.

What we like about Veda Soothe is that it is rich in anti-inflammatories, it may be able to protect the joints from oxidative damage, and that it contains Bioperine.

The areas in which Veda Soothe could use some improvement are the fact that it could have more benefits directly related to arthritis, the product may not work consistently from user to user, and curcumin may cause stomach discomfort.

All in all, we recommend giving Veda Soothe some serious thought as well as some products that are similar to it. 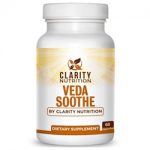