Theragold is a joint care supplement that has been marketed to be safe and effective in the rehabilitation of damaged and worn out joints. According to the manufacturer, the product is meant to reduce joint inflammation, relieve muscles, joints and soothe a sore back and neck. It is especially effective in cases of arthritis, fibromyalgia, and sciatica.

Theragold is available as a topical cream that can be applied directly to the aching joints. Being a cream, Theragold is quick to respond with the manufacturer claiming that it acts within the first ten minutes. If you need to purchase this cream, you can do it over the counter without the need for a prescription. This means that it can be bought over the counter. If you order it from the official website, you will part away with $17.95 plus shipping cost for the 57ml cream. All the same, you can avoid paying for shipping if you buy an extra cream.

What is the Company Behind Theragold?

Theragold is a topical cream that targets joints. It is categorized as a topical analgesic given the fact that it kills pain in the region it is applied. On top of soothing pain, Theragold is touted to help fight inflammation and soothe sore muscles. The producers claim that the product is natural with no added additives.

According to information on the official website, Theragold is a registered brand in New Zealand. It is manufactured by a company known as Square One New Zealand. All the same, it ships and sells all over the world. You should confirm whether it ships to your country.

What are the Ingredients Used in Theragold?

What are the Pros of Theragold?

What are the Cons of Theragold?

How do you use Theragold?

To use this cream, clean the affected place with warm water and dry with a clean towel. Scoop Theragold Cream with your finger and gently massage the affected area with the cream. Do this for 1-2 minutes until the cream is evenly distributed. Allow up to thirty minutes for the cream to be absorbed before wiping off. Do not use this product on the broken or damaged skin as it might cause irritations.

Theragold Cream is a topical analgesic that is applied directly to the affected area. We like the fact that it fights both pain and inflammation a thing that is not common with other topically applied creams. If you want to buy a more competitive product, feel free to explore some of our recently reviewed topical analgesics. 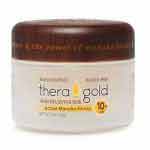 3.4 / 5.0
Theragold Reviewer Rating
Have a Question?
Be specific and include what you've already tried.
Ask A Question
x