Cross biotics Ceylon Cinnamon is a dietary supplement designed to improve functions within your body and improve health in general. It has antioxidants and other compounds with some health benefits. It is a pure Ceylon Cinnamon product with no added elements.

A bottle contains 60 capsules and can be purchased via the manufacturer’s official portal.

What is Cross biotics Ceylon Cinnamon? 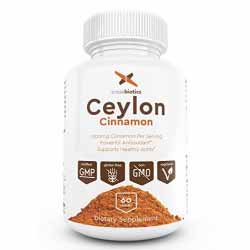 Cross biotics Ceylon Cinnamon is a supplement designed to help relieve pain and inflammation in joints. It is packed with other health benefits which include improving cardiovascular health, improving skin appearance, weight loss, blood sugar regulation, and circulation. It is rich in antioxidants with help regulate the mentioned functions and remove toxins from your body

It is argued that it is free of GMOs, gluten, and artificial colors, flavors, and preservatives. Users should take two capsules daily, at least 20 minutes before meals with a glassful of water.

What is the Company Behind Cross biotics Ceylon Cinnamon?

The company Crossbiotics manufacture Cross biotics Ceylon Cinnamon. This company was founded by Ash and Jay and has its location in the USA.

The company specializes in the making and distributing of health supplements aimed at improving the user’s health and productivity. They cinnamon is organically grown in Ceylon.

What are the Ingredients Used in Cross biotics Ceylon Cinnamon?

Organic Ceylon Cinnamon – It is also called as Cinnamon Verum. It has antioxidant, anti-inflammatory, and anti-aging properties among others.

Cross biotics Ceylon Cinnamon works by relieving joint pain and inflammation. It supports the production of collagen which increases cartilage. It increases lubrication in joints thus reducing the rubbing which then prevents future wear and tear in joints and improves your mobility. It also strengthens the ligaments and tendons for enhanced connections between bones and increased flexibility.

It fights off free radicals thus reducing their damage on joints. It also promotes toxins removal which in combination reduces fluid retention and helps reduce swelling in the joints.

The removal of free radicals protects skin cells from their oxidation damage and prevent skin from losing its firmness. This prevents the premature formation of aging signs and improves skin appearance.

It increases fat burning and metabolism. The increase in fat burning reduces fat deposits which contribute to weight loss and allows better circulation of blood as there is a reduction in cholesterol levels in the bloodstream and arteries are unblocked and improves cardiovascular health.

The increases metabolism ensures that the carbohydrates one takes in are used up for energy production and not converted to glucose which would add to your blood sugar levels.

What are the Pros of Cross biotics Ceylon Cinnamon?

What are the Cons of Cross biotics Ceylon Cinnamon?

You May Also Check: Relief Factor and Arthrozene

Cross biotics Ceylon Cinnamon s a dietary supplement made of Ceylon Cinnamon. It will reduce your pain and inflammation in joints. It also reduces fluid retention which translates to reduced swollenness.

It has weight and fat reduction properties which contributes to improved fluid and blood flow to your body for an improvement in your heart health and prevention of cardiovascular conditions. It will reduce damage to skin cells thus slowing the formation of wrinkles and other signs of aging and therefore make your skin look young and radiant.

Due to these and other functions that will be carried out by this supplement, some people might end up using it. We advise all users to analyze this product to be sure of its working and the possible adverse reactions it may cause.

Users should scrutinize its ingredient and ensure that it is safe and its making conforms to all the production processes. The market has other supplements with similar claims and components. Therefore, users should compare the price and settle for the pocket-friendly one. 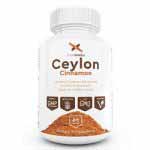 3 / 5.0
Cross biotics Ceylon Cinnamon Reviewer Rating
Have a Question?
Be specific and include what you've already tried.
Ask A Question
x