What is 24K Golden Fuel?

24K Golden Fuel is not the kind of supplement that comes in pill form. Rather, it is a powder that you can mix into drinks or add to certain foods. The product relies on a combination of turmeric and collagen in order to promote improved overall health and protect the body from oxidative damage since one of the main ingredients, turmeric, is said to be a powerful source of natural antioxidants.

What is the Company Behind 24K Golden Fuel?

The company behind 24K Golden Fuel is called Live 24K and it was founded by a woman who used to be a nutrition coach and personal trainer. She founded the company after being diagnosed with an autoimmune disease which prompted her to search for and develop holistic remedies.

Today, the company claims that their products help people live healthier in a natural way and that the products prevent damage to oxidation.

How Does 24K Golden Fuel Work?

The main components behind 24K Golden Fuel are collagen and turmeric. Both of these components play vital roles in keeping the organs of the body functioning normally and optimizing overall health.

What are the Ingredients in 24K Golden Fuel?

The interesting thing about the ingredient list for 24K Golden Fuel is that it includes all natural ingredients that are beneficial in a health sense, but are also intended to give the product a certain flavor. Take a look at some of what is in 24K Golden Fuel:

What are the Pros of 24K Golden Fuel?

What are the Cons of 24K Golden Fuel?

How Should you Use This Product?

The recommended usage for 24K Golden Fuel is to add 1.5-2 teaspoons of the powder into 8-12 ounces of liquid. You can add a bit more or less if depending on your tastes.

How Much Does 24K Golden Fuel Cost?

On the official Live 24K website, 24K Golden Fuel will cost $29.00. However, this product is sold by online retailers where the price may vary a bit.

While the official Live 24K website does not lay out the details of their return policy, there is contact information given where details about the policies can be obtained.

We could not find any free trial offers for 24K Golden Fuel. You may want to contact the company that makes it and ask them if they can send you a trial sample.

24K Golden Fuel is a turmeric powder that engages the health benefits that are supposed to be related to turmeric curcumin. It is a powder that you can mix with drinks or incorporate into some of your food recipes.

After reading about the product and reviewing it, we can state that there are an almost equal amount of benefits and disadvantages to it. The benefits are that it can provide your body with antioxidants, boost your immune system, and possibly prevent joint inflammation.

Some of the disadvantages of 24K Golden Fuel are that you may not like the taste of it, it is not suitable if you adhere to a vegan diet, and turmeric can be a little rough on your stomach. When all is said and done, we recommend that you look at some similar superfood products as well as 24K Golden Fuel. 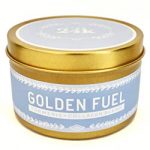